This Byzantine binding video tutorial is based on a facsimile of a 17th century Byzantine Manuscript. The tutorial is divided into 6 parts

Attaching a new thread to a short one during book quires sewing..

I understand that this topic maybe not a knowledge target for binders and conservators professionals who normally knows by heart how to do attaching a new thread to the short one during sewing process and we do it thousands of times on our daily binding and sewing work.
So! what features this knot do you think it should carry?
Features!! what a strange word for such a very basic and regular process for bookbinder and book conservators as well, but think carefully now!
mmmm yes! it should be:

So now you understand that your new thread should be attached to the short one with 3 basic features
performing a weaver's knot will give you all those features and here is step by step picture tutorial teaching you how to do this knot.

note: I am using here 2 thread colors to make it easy for this tutorial to distinguishes the process
I will point to the short thread (the thread that is in your quire) with the  White(A) thread and the new one (which you wont to knot with the short one) with the Blue(B) thread in the tutorial pictures. 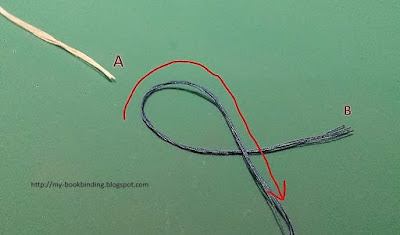 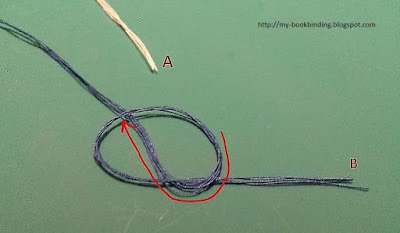 Pull up the long end from the middle of the loop then pull together the longer and the shorter ends of thread (B) until it makes a sort of hanging knot. 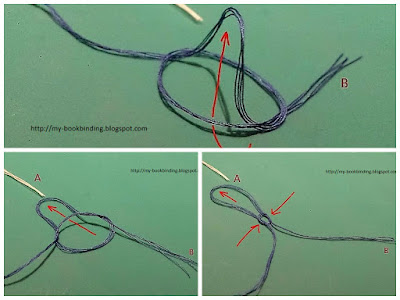 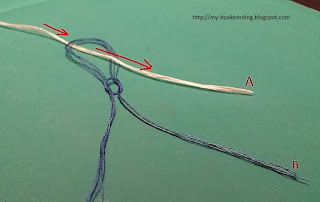 Place over the short end (A) of the old thread inside the loop, the encircling loop must not be tightened. 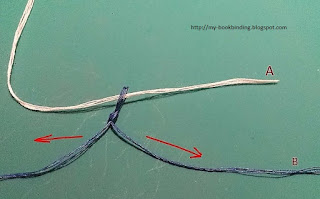 Pull both longer and shorter ends together for the new
thread (B) in an opposite direction.

Note: In all previous steps, only the new thread (B) ends (the shorter one and the longer) pulled.

NOW you tight the knot pulling both threads the short one (A) and the new one (B) from both longer sides to completely knot them, 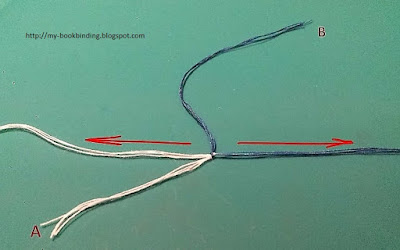 Both short ends (A) & (B) are cut quite close to the knot, if you do this knot outside the quires (from the spin direction) carefully take this knot through the inside of the section as sewing is continued. 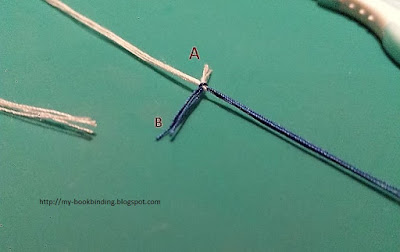 This tutorial blog is for those who like to print and keep a copy in their reference library, but for thous who prefer to watch a tutorial video, here is one that I have made for you.